Read my note on liquidity for December.

Read my note on liquidity  for November. 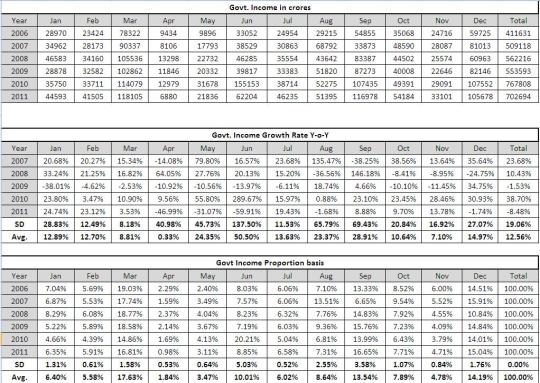 Government Income pattern note:
• Advance tax inflows during March, June, September and December contribute nearly 55-65% of government’s budgeted revenue.
• Again here as well SD of Govt. income on proportionate basis is very low which says govt. income is quite consistent. This consistency (on proportionate basis) helps asset managers and bankers to configure their liquidity model with optimum accuracy.
• Advance taxes are collected in four installments — 15% by 15 June; 40% by 15 September; 75% by 15 December and 100% by 15 March.

If you have something more on this than do add your comments.

Liquidity management in the system is one of the important function of RBI. RBI uses LAF window to either suck or pump liquidity from/in the market. Repo is the rate at which Banks borrow from RBI and Reverse Repo vis-a-versa. Net LAF borrowing (i.e. Repo borrowing amount less Reverse repo lent amount)(lets assume Rs.50) + MSF borrowing(Rs.20) + Term repo(via RBI)(Rs.20) borrowing + borrowing under standing liquidity facility(SLF)(Rs.10) gives one a holistic view over liquidity. Liquidity deficit for above case will be 50+20+20+10 = Rs.100

Actual numbers for advance tax outflows ranges from 400-650Billion depending upon economic activities quarter of payment. During economic boom this number may come at higher level as business activity would have been more whereas during recessionary period amount collected would be comparatively low.